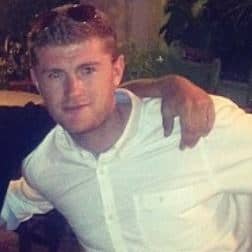 What’s your name, what do you do and where do you come from? (I’m starting to sound like Cilla Black!)

Hi Dave, I’m Andy. One of those entrepreneurial types, originally from a small town called Stamford, about 10 minutes from Peterborough, now living in the East End of London.

How would you define an entrepreneur and how do you feel about being called one?

Well, to be honest with you, I hate the phrase entrepreneur. It just seems to have lost a bit of its meaning within today’s society. In my eyes entrepreneurs are a much rarer breed than what is perceived. In fact, even though I founded and developed the Kits4Causes charity I would only describe myself as an aspiring entrepreneur.
Entrepreneurs, to me at least, have to have these two things in order to be classed as one. Firstly they’ve got to have built awesome organisations – they can’t just be all fart and no poo! Secondly they’ve got to have the personality – tenacity, drive, determination, the will to take the risk, but more than anything the true belief in the value they’re adding and the benefits that it can provide to the people they serve. Entrepreneurship is far more mental than it is anything else.

Talk me through Upcare.. What is it? and what’s the story behind it?

You’ve set me up for an opportunity to give you my elevator pitch there Dave! Upcare is an online platform that makes finding affordable, appropriate and experienced elderly care services easy.
The story’s an interesting one. My Granddad has recently been diagnosed with vascular dementia and the truth be known it’s been unbelievably difficult to find him care. Everything was placed onto my family’s shoulders and even with the want and the will, trying to look after two homes is nothing short of a massive struggle. On the flip side, my Mum was an elderly carer for 15 years and she absolutely loved her job, but it just became unaffordable for her with a mortgage to pay for and me to look after – as you’d expect I was a bit of a handful. So yeah, I feel I’m in a rather unique situation with a real personal connection to both of the huge problems in elderly care, and more than anything I just think the current situation is wrong and someone needs to change it for the better

Now this could get deep because there are loads of things all working together. If I was going to sum it up I’d say making things better – I’m a progress junkie at heart. But then I also have this fear of not doing great things during the time I have on this earth. I could go much deeper but I’m sure a psychologist is already going to have a field day as it is, haha.

That’s a hard one. I think there are so many people who do things that really inspire me so I probably don’t have one person but more a collage of inspirational acts. Without looking too hard it’s actually pretty easy to find inspirational people in some shape or form.

Of all the world leaders, past and present, who would you like to see in a ring with Tyson?

There’s just been so many. Stalin, Pol Pot, Chairman Mao, Kim Jong Il, and if the Bible is to be believed King Herod was a bit of a shit as well, but Hitler took the biscuit frankly didn’t he?

What advice would you give to anyone thinking about setting up their own business?

If you want it, then just go for it! No one else will do it for you. Usually people fear failing but it’s just wasted energy – running a successful business is a process and perfection is created through imperfect steps. Failure is rarely fatal. Finally,and more than anything, ask why you want to set your business up – that’ll be the thing that gets you through the inevitable dark periods.

Where do you see yourself in 5 years time?

I don’t really know, and that’s all part of the fun!