Dr. Bruce Perry is a child psychiatrist and the author of The Boy Who Was Raised as a Dog, which is a fantastic mixture of real storytelling of traumatic incidents coupled with education on how trauma affects the developing child’s brain.
Assisted by a talented science writer, child psychiatrist Bruce Perry presents a series of heartbreaking stories of children severely damaged by trauma. But that’s only one side of this remarkable book. The other side is how many of these profoundly damaged children were assisted to heal. 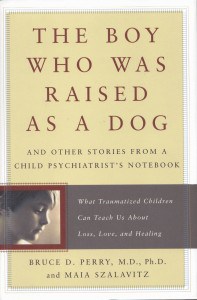 Dr. Perry says that while extreme cases of child neglect may make headlines, these examples are just the tip of the iceberg. “Most people don’t realize this, but there are twice as many neglected children in the United States as there are physically and sexually abused combined,” he says.

“It’s like a silent epidemic,” he says. “From a functional perspective for the developing child, neglect is the absence of necessary stimulation required to build a certain part of the brain so it can function normally.”

When a child doesn’t get enough stimulation early in life, Dr. Perry says the brain may develop differently. “That changes all kinds of functions, including the ability to form and maintain relationships,” he says.

Below is an interview with Dr. Bruce Perry where he discusses the disconnect between what our children need to thrive and what the modern world has to offer, emphasizing the importance of human connections at early stages in life.

One thing Dr Perry says that I find very interesting is what he says about the violence that permeates everywhere and the effect it has on our minds..

He says “There is no doubt that we are being bombarded with violence, whether it’s on TV, in magazines or in videogames, the impact on a developing child is huge!
We are all influenced heavily by viewing something in a repetitive way..
An interesting study that was done shows that a healthy child that is exposed to a violent video game will activate the part of the brain involved in threat and fear the same way as if the child was actually living the experience, so in some ways we are taking these children and we are providing patterned repetitive experiences that we really don’t want to be providing them”

This is a powerful and insightful book. The patient stories are genuine and heart-wrenching, and the lessons about the human brain and its development ring true and offer refreshing and valuable perspectives on how the mind works.

Sweet blog! I found it while searching on Yahoo News. Do you have...