The Brain that changes itself

The brain that changes itself is a truly amazing collection of case histories detailing the astonishing progress of people whose conditions had long been dismissed as hopeless.
The book documents the following cases: 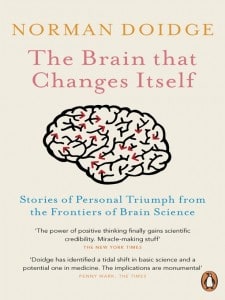 One of the examples of the brain rewiring itself is of a woman with damage to the inner ear’s vestibular system, where the sense of balance resides, feels as if she is in constant free fall, like a trap door has just been opened up beneath her.
Sitting in a neuroscience lab, she puts a set of electrodes on the surface of her tongue, a wired-up hard hat on her head, and the feel of falling stops. The apparatus connects to a computer to create an external vestibular system, replacing her damaged one by sending the proper signals to her brain via her tongue.
But that’s not all. After a year of sessions with the device, she no longer needs it: her brain has rewired itself to bypass the damaged vestibular system with a new circuit.

In another case, an amputee has a bizarre itch in his missing hand: unscratchable, it torments him. A neuroscientist finds that the brain cells that once received input from the hand are now devoted to the man’s face; a good scratch on the cheek relieves the itch. Another amputee has 10 years of excruciating “phantom” pain in his missing elbow. When he puts his good arm into a box lined with mirrors he seems to recognize his missing arm, and he can finally stretch the cramped elbow out. Within a month his brain reorganizes its damaged circuits, and the illusion of the arm and its pain vanish.

Below is an interview with the author of the book, Norman Doidge, who is a Canadian-born psychiatrist.. Hope you enjoy. Feel free to comment and share..