Last Updated on April 3, 2015 by david.smith.segarra

The Forgiveness Project: Stories for a Vengeful Age by Marina Cantacuzino, is a collection of thought-provoking real life stories that conveys the powerful message of forgiveness. Story after story, you read about people who have been terribly hurt but have found the strength and courage to forgive those who have wronged them. 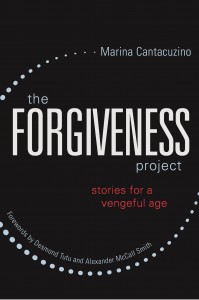 This is an amazing, fascinating and…. occasionally painful, read. Marina Cantacuzino, founder of The Forgiveness Project, shares a series of 40 powerful, real life stories, told with honesty and transparency. During the course of the book we are shown incidents of violence from the perspective of both victims and perpetrators.

I was so moved reading this book. To read the horror these people have gone through and to know they have found the strength to forgive and move on with their lives is truly inspirational. A key theme to the book is the importance of creating the right conditions for forgiveness to grow, and how this is not something that should be coerced or pushed onto others.

Below is the story of Eva Mozes who was taken along with her twin sister Miriam to Auschwitz where Dr Josef Mengele used them for medical experiments.

At the age of ten, twins Eva and Miriam Mozes, were taken to Auschwitz where Dr Josef Mengele used them for medical experiments. Both survived, but Miriam died in 1993 when she developed cancer of the bladder as a consequence of the experiments done to her as a child. Eva Kor has since spoken explicitly about her experiences at Auschwitz and founded The CANDLES Holocaust Museum in Indiana where she now lives. In 2003 the museum was destroyed in an arson attack, believed to be by white supremacists.

Miriam and I were part of a group of children who were alive for one reason only – to be used as human guinea pigs. During our time in Auschwitz we talked very little. Starved for food and human kindness, it took every ounce of strength just to stay alive. Because we were twins, we were used in a variety of experiments.Three times a week we’d be placed naked in a room, for 6–8 hours, to be measured and studied. It was unbelievably demeaning.

In another type of experiment they took blood from one arm and gave us injections in the other. After one such injection I became very ill and was taken to the hospital. Dr Mengele came in the next day, looked at my fever chart and declared that I had only two weeks to live. For two weeks I was between life and death but I refused to die. If I had died, Mengele would have given Miriam a lethal injection in order to do a double autopsy. When I didn’t die, he carried on experimenting with us and as a result Miriam’s kidneys stopped growing. They remained the size of a child’s all her life.

On 27 January 1945, four days before my 11th birthday, Auschwitz was liberated by the Soviet army. After nine months in refugee camps I returned to my village in Romania to find that no one from my family had survived.

Echoes from Auschwitz were a part of my life but I did not speak publicly about my experiences until 1978 after the television series The Holocaust was aired. People would ask me about the experiments but I couldn’t remember very much so I wanted to find other twins who were liberated with me. I wrote to newspapers asking them to publish an appeal for other survivors of Mengele to contact me. By 1980 I was sending out 500 letters a year – but still no response. In desperation, one day I decided to start an organization in which I would make myself President. People are always impressed if they get a letter from a president, and it worked. Finally I was able to find other twin survivors and exchange memories. It was an immensely healing experience.

In 1993 I was invited to lecture to some doctors in Boston and was asked if I could bring a Nazi doctor with me. I thought it was a mad request until I remembered that I’d once been in a documentary which had also featured a Dr Hans Munch from Auschwitz. I contacted him in Germany and he said he would meet with me for a videotaped interview to take to the conference. In July 1993 I was on my way to meet this Nazi doctor. I was so scared but when I arrived at his home he treated me with the utmost respect. I asked him if he’d seen the gas chambers. He said this was a nightmare he dealt with every day of his life. I was surprised that Nazis had nightmares too and asked him if he would come with me to Auschwitz to sign a document at the ruins of the gas chambers. He said that he would love to do it.

In my desperate effort to find a meaningful ‘thank you’ gift for Dr Munch, I searched the stores, and my heart, for many months. Then the idea of a Forgiveness letter came to my mind. I knew it would be a meaningful gift, but it became a gift to myself as well, because I realized I was NoT a hopeless, powerless victim. When I asked a friend to check my spelling, she challenged me to forgive Dr Mengele too. At first I was adamant that I could never forgive Dr Mengele but then I realized I had the power now…the power to forgive. It was my right to use it. No one could take it away.

On 27 January 1995, at the 50th anniversary of the liberation of Auschwitz, I stood by the ruins of the gas chambers with my children – Dr Alex Kor and Rina Kor – and with Dr Munch and his children and grandchild. Dr Munch signed his document about the operation of the gas chambers while I read my document of forgiveness and signed it. As I did that, I felt a burden of pain was lifted from me. I was no longer in the grip of hate; I was finally free.

The day I forgave the Nazis, privately I forgave my parents whom I hated all my life for not having saved me from Auschwitz. Children expect their parents to protect them; mine couldn’t. And then I forgave myself for hating my parents.

Forgiveness is really nothing more than an act of self-healing and self-empowerment. I call it a miracle medicine. It is free, it works and has no side effects.

I believe with every fibre of my being that every human being has the right to live without the pain of the past. For most people there is a big obstacle to forgiveness because society expects revenge. It seems we need to honour our victims but I always wonder if my dead loved ones would want me to live with pain and anger until the end of my life. Some survivors do not want to let go of the pain. They call me a traitor and accuse me of talking in their name. I have never done this. Forgiveness is as personal as chemotherapy – I do it for myself.